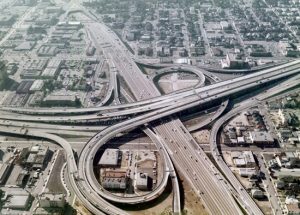 Wright Street (at bottom) and the Harbor-Santa Monica Freeway Interchange, 1964.

Back in 1884, Wright Street was just another new road on the outskirts of Los Angeles.  Bungalows quickly filled its freshly-surveyed lots, and as the city grew, apartments and commercial buildings soon followed.  In 1954, California’s first superhighway, the Harbor Freeway, passed two hundred feet westward, and a scant seven years later, the Santa Monica Freeway encroached from the east.  Construction began on the connecting ramps, and Wright winced as road workers halved its length, blocked off one end, and encircled it with concrete pillars topped by pavement.

In March 1962, with great fanfare, politicians dedicated the new interchange.  With it in place, downtown Los Angeles was now completely ringed by freeways!  During the festivities, Wright Street tried to point out that it had also been surrounded, and that in honor of its sacrifice, didn’t it deserve a cake, or a singing telegram, or something?  But nobody seemed to care.  Hrumph!

Today, of Wright’s six existing buildings, the oldest is the roaring-’20s-era Castle Hotel, long since converted to apartments that house a few dozen semi-permanent residents.  There, the air reverberates with hydrocarbon flatulence, but as each car passes, the fossil-fuel-free future inches closer.  Three decades past tomorrow, Wright Street will once again be living large: as a 500-foot-wide island of peace, secluded from the urban throb by arteries now coursing with bicycles and electric vehicles, each warbling a cute whizzy burble like they did in the Jetsons.

Alas, Wright Street may never see this heyday future, because, despite surviving the freeway juggernaut, its continued existence is threatened… by art, of all things.  Enter northern California-based Luther Thie and his LA Interchange project, which proposes to replace Wright Street with a park, anchored by a giant fountain that changes its flow based the Highway Patrol’s accident reports, spraying highest after a pileup with a possible fatality.

And now, we present four regional zooms of the burger territory maps, similar to the originals except that they represent the two most influential END_OF_DOCUMENT_TOKEN_TO_BE_REPLACED

On St. Patrick’s Day, the Von Worley clan traditionally dines on reuben sandwiches and boiled potatoes, and this year, word came down from END_OF_DOCUMENT_TOKEN_TO_BE_REPLACED

Them young’uns have different names than they used to!  Stateside, a century ago, you couldn’t spit without hitting a John, William, or Mary.  My grade END_OF_DOCUMENT_TOKEN_TO_BE_REPLACED

Eight short weeks had passed since Monika and I first met, and already, we knew that we’d be lovebirds forever.  END_OF_DOCUMENT_TOKEN_TO_BE_REPLACED