This past Halloween, we approached a curious jack-o’-lantern with the solitary number 350carved into its flesh.  A bright-eyed man emerged from the tiny home behind it.  My kids yelled “trick-or-treat!”  He dropped some candy in their buckets.  And then, I asked the question that he’d obviously been waiting for: 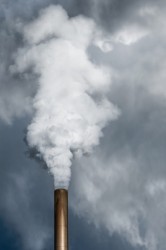 What’s with the 350 pumpkin?  Is that your house number?

After a brief dramatic pause, the man spoke passionately of greenhouse gasses and global warming, the well-intended but woefully-inadequate Kyoto Protocol, and that we must swiftly reduce atmospheric carbon dioxide to a level that scientists have determined will spare the planet:

We thanked “350 Guy” for the information and candy and continued on our way.

Later, to avoid another such embarrassing intellectual faux pas, I began to bone up on my climatology.  Now, for example, I know that the fraction of carbon dioxide in the atmosphere has risen from a pre-Industrial 280 parts per million (ppm) to around 390 ppm today.

Some straightforward calculations reveal that this additional 110 ppm of CO2 amounts to a mass of 564,000 metric megatons and volume of 437,000,000 gigaliters – the shocking equivalent, per capita, of one bubble of pure carbon dioxide, 163 feet in diameter, for each man, woman, and child on the face of this earth (*):

The Per-Capita Bubble Of Excess Industrial-Age Carbon Dioxide. Click to see it bigger!

That’s 6.8 billion enormous spheres of greenhouse gas, each large enough to swallow the entire 129-foot length of a Boeing 737-800 airliner with room to spare.

On that note, please allow 350 Guy and Yours Truly to announce a collaborative effort – our Fall 2010 line of giant-CO2-bubble jack-o’-lanterns – coming in five months to a front porch near you!

And now, we present four regional zooms of the burger territory maps, similar to the originals except that they represent the two most influential END_OF_DOCUMENT_TOKEN_TO_BE_REPLACED

On St. Patrick’s Day, the Von Worley clan traditionally dines on reuben sandwiches and boiled potatoes, and this year, word came down from END_OF_DOCUMENT_TOKEN_TO_BE_REPLACED

Them young’uns have different names than they used to!  Stateside, a century ago, you couldn’t spit without hitting a John, William, or Mary.  My grade END_OF_DOCUMENT_TOKEN_TO_BE_REPLACED

Eight short weeks had passed since Monika and I first met, and already, we knew that we’d be lovebirds forever.  END_OF_DOCUMENT_TOKEN_TO_BE_REPLACED