Hooray!  It’s the first of June, and long gone are winter cold and spring gloom.  We’re footloose and parka-free, baby birds chirp with glee, green lawns and mowers duel endlessly, and he intercepts the puck at mid-ice, shakes a defender, speeds over the blue line, fades right, jigs left, cocks his stick, lets loose with a slapshot, and scores!  Goal!!!

You betchya, as illustrated by the following graph, which shows the calendar dates of the NHL’sStanley Cup Finals for each season from 1927 to present: 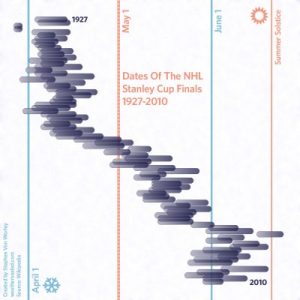 After hanging back for nearly forty years in the chilly territory of April, the finals skate past the May 1st center line in 1965 and dart offsides during the ’92 playoffs.  Since then, they’ve lingered there, ending latest on the warm June 24th evening that capped 1995’s lockout-delayed season, three days past the official beginning of summer!

Now, call me a hopeless nostalgic, but remove something far enough from its natural state – say from a frozen pond to a climate-controlled ice rink in the summertime – and gone is the gravitas that made it interesting in the first place.  Hockey playoffs in June have the same emotional pull as the World Series – played indoors, on Astroturf, in February.

On the other hand, the NHL’s still solvent, so maybe, on balance, the late season is a draw?  Does the average person find hockey irresistible when dressed in Bermuda shorts and a tank top?  God, it’s hot… and that ice looks so cold and refreshing… come to mama, so she can belly-flop onto the rink like an octopus?

Next thing you know, the National Hockey League will be doling out teams to cities where it never snows, and naming them after those “warm-weather” animals… like sharks and panthers!  Hey hoser, how silly would that be, eh?

And now, we present four regional zooms of the burger territory maps, similar to the originals except that they represent the two most influential END_OF_DOCUMENT_TOKEN_TO_BE_REPLACED

On St. Patrick’s Day, the Von Worley clan traditionally dines on reuben sandwiches and boiled potatoes, and this year, word came down from END_OF_DOCUMENT_TOKEN_TO_BE_REPLACED

Them young’uns have different names than they used to!  Stateside, a century ago, you couldn’t spit without hitting a John, William, or Mary.  My grade END_OF_DOCUMENT_TOKEN_TO_BE_REPLACED

Eight short weeks had passed since Monika and I first met, and already, we knew that we’d be lovebirds forever.  END_OF_DOCUMENT_TOKEN_TO_BE_REPLACED