As penance for my recently-inadequate college basketball fandom, I must submit an offering!  That’s what last night’s flaming apparition said, at least, and who am I to reject such a terrifyingly-unambiguous request from the Gods of Hoops?

So, this morning, I hastily dug through the season’s NCAA Division I men’s basketball statistics, determined the nine tourney teams that have played against two or more of this year’s Final Four, and rolled them into a graph: 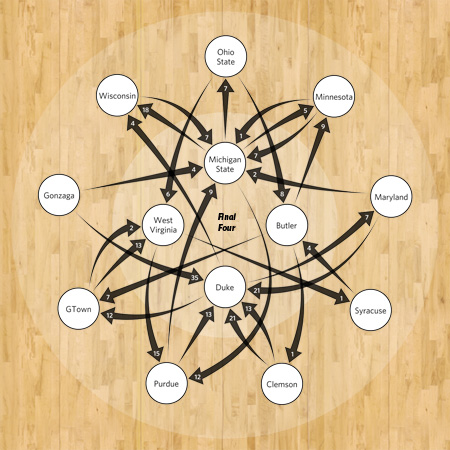 Final Four Versus Teams In Common

Towards the middle, we see the Final Four – Duke, Michigan State, Butler, and West Virginia – and to the outside, the other tournament teams that they’ve shared during the 2009-10 season.  Arrows represent the games between the two groups, each pointing towards the winner and numbered with the margin of victory.

An obvious favorite: the powerhouse team that’s notched an uninterrupted run of key wins?  You won’t find it here.  Rather, we see the epitome of parity: a loopy graph full of see-saw rivalries and contradictory evidence.  In fact, start at any Final Four team and follow the arrows, and you can trace a path through all but one of the other schools and then back again to where you began.  Try it!

Our championship prediction?  Well, lacking other guidance, we’d have to pick Duke, for the way that it consistently manhandles its opponents in victory.  However, as they say in Vegas, the crap will shoot, and any of the Four could win.

The best advice?  Unless you’ve got money to burn, block your bookie’s number and don’t call him again until next season!

And now, we present four regional zooms of the burger territory maps, similar to the originals except that they represent the two most influential END_OF_DOCUMENT_TOKEN_TO_BE_REPLACED

On St. Patrick’s Day, the Von Worley clan traditionally dines on reuben sandwiches and boiled potatoes, and this year, word came down from END_OF_DOCUMENT_TOKEN_TO_BE_REPLACED

Them young’uns have different names than they used to!  Stateside, a century ago, you couldn’t spit without hitting a John, William, or Mary.  My grade END_OF_DOCUMENT_TOKEN_TO_BE_REPLACED

Eight short weeks had passed since Monika and I first met, and already, we knew that we’d be lovebirds forever.  END_OF_DOCUMENT_TOKEN_TO_BE_REPLACED